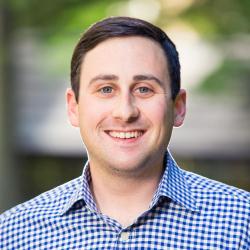 Described by the US Chief Technology Officer as one of “the baddest of the badass innovators,” prior to GitHub, Ben was a member of the inaugural class of Presidential Innovation Fellows where he served as entrepreneur in residence reimagining the role of technology in brokering the relationship between citizens and government. Ben has also served as a Fellow in the Office of the US Chief Information Officer within the Executive Office of the President where he was instrumental in drafting President Obama’s Digital Strategy and Open Data Policy, and on the SoftWare Automation and Technology (SWAT) Team, the White House’s first agile development team. His paper, Towards a More Agile Government was published in the Public Contract Law Journal, arguing that Federal IT Procurement should be more amenable to modern, agile development methods.

As an attorney passionate about the disruptive potential of technology, Ben holds a J.D. and an M.B.A. from the George Washington University and is a member of the DC Bar. When not trying to change the world, he enjoys tackling otherwise-impossible challenges to sharing information using nothing more than duct tape, version control, and occasionally a pack of bubblegum. Full resume.

Feel free to email him at [email protected] or you can find him on these social networks: